PES: EUCO must secure the recovery without compromising on European values

Socialists and democrats will today push for a swift conclusion to the MFF and the Recovery and Resilience Facility (RRF), but we will not waver on our commitment to the Rule of Law. This was the conclusion as PES prime ministers, European commissioners and leaders met in Brussels this afternoon to coordinate ahead of the European Council.

“Socialists and democrats stand by European values and we stand for action now to help Member States get through this crisis. Europe cannot afford to be in a position where it must choose between its principles and its citizens.

“European socialists and democrats have always made a clear commitment to promoting solidarity and the defence of the Rule of Law in that process. It is our duty to maintain the pressure against any signs of democratic deficiencies in the Union, and the PES remains as always entirely committed to this. At the same time, the PES also wants a quick conclusion of the budget negotiations so we can fund a recovery for Europe.

“I urge all members of the European Council to do the right thing. Europe must never compromise on its values. Europe must never choose deferral or delay when it could be helping citizens. The European Council must not row back from the agreement reached in July: neither in its commitment to support recovery, not in its commitment to uphold the Rule of Law.

“We socialists and social democrats played a crucial role in creating the right conditions for a more green, social and equal future for all Europeans. The EU must now be the driving force behind a recovery which supports jobs and seizes the opportunities of the digital transition and the European Green Deal.”

Other topics which will be addressed at today’s European Council were also discussed.

PES prime ministers, European commissioners and leaders welcomed progress on a coordinated European approach to tackling COVID-19, based on solidarity, robust processes and fast, fair and affordable access to vaccines.

The meeting insisted that the steps that are being taken to achieve a climate-neutral Union by 2050 are necessary. They commended the leadership of Executive Vice-President Timmermans on the roll-out of the European Green Deal, and agreed that all Member States must make every effort to fulfil these ambitions. Action for the climate and a just transition are key PES policies.

Today’s meeting continued discussions that took place earlier this month, when PES prime ministers, European commissioners and leaders met ahead of the Special European Council on 1 October. At that meeting, the PES once again urged the EU to stick to its values.

The meeting was attended by:

Footage from the meeting is available to view and download from Europe by Satellite. Photographs are available on the PES Flickr page. 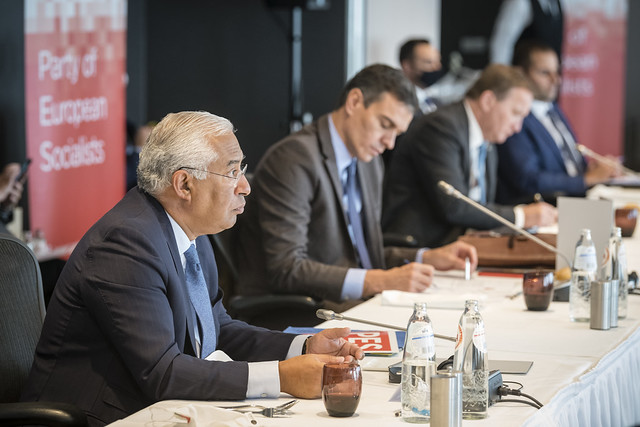